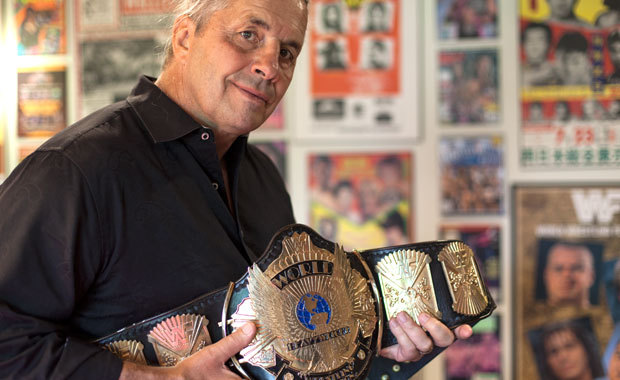 It was the match of a lifetime: Bret “The Hitman” Hart versus prostate cancer.

The retired Canadian pro wrestler — known across the world for being the best there is, was, or ever will be — was not going to be pinned to the mat without one hell of a fight.

The Calgary-born athlete first learned he might have prostate cancer in the fall of 2013. A routine physical included a blood test that looked at his prostate-specific antigen (PSA) levels. His elevated PSA levels led his doctor to believe he had a slow-growing type of prostate cancer. Active surveillance meant Hart would have to undergo a biopsy and have regular blood tests to track the disease’s progression.

“I never felt anything. I had no symptoms at all,” he recalls. “It was a mystery to me that there was anything wrong. ‘Devastating’ is a good word for how I felt when I received the diagnosis. I was terrified about what the future might hold. It was a hard thing to accept.”

His PSA levels continued to rise, then dropped, then rose again in the fall of 2015 to a level that caused Dr. Eric Hyndman of the Prostate Cancer Centre in Calgary to start talking about dates for the surgery to remove Hart’s prostate.

“Once it was booked for February 2016, I had five months to think about it,” Hart says. “I wanted to try and avoid it. I looked online for solutions, and even went the homeopathy route. In the end, I was painted into a corner and had to confront the situation head on.

He was fortunate to have Dr. Hyndman, one of the leading experts in prostate cancer, as his doctor. Hart has an enormous respect for him — the man who coached him through the ordeal with a combination of directness, reassurance, and honesty.

Going public about his cancer

Hart underwent a robotic prostatectomy surgery in February 2016 — a less traumatic, minimally invasive procedure that would leave more nerve endings intact. But, before he went into the hospital, Hart posted a poignant and emotional message to his fans on his Facebook page, letting them know he was in the midst of the biggest fight of his life.

“It’s a big win. Better than any title I could ever possibly get.”

“I had no intention of telling anyone,” he says. “But, as the day of my surgery neared, I knew I had to tell my sisters and my brothers about it. I thought about what I should do, then I decided I should have the courage to speak out so that maybe something good would come out of what I was going through.”

Something good did happen. Fans, old high school friends, family members, and strangers who heard about Hart’s journey went to clinics and their family doctors to get a PSA test. This news made Hart happy, because he now knows firsthand how early detection is the key to beating prostate cancer successfully.

Getting a PSA test is crucial

Hart’s advice to men: “Don’t be afraid to find out the truth. Whatever the diagnosis is — you’re better off knowing. It’s as simple as a blood test. If it is cancer, get on it as quickly as possible. It could save your life.”

Nowadays, Hart is feeling good and cancer-free with a PSA level of zero. He’ll continue to have his levels checked every 3 months for the next 10 years. Still, he’s grateful for all the support he received from his doctor, his wife Stephanie, and his family for helping him get through it all. “I like to think that I was the guy who beat cancer,” says Hart. “It’s a big win. Better than any title I could ever possibly get.”

Sir- My son Chester Jr. said I should look up your story and use it as encouragement for my battle with Prostate Cancer. I am having the same surgery as you had on Feb. 5th and I have to say it is the strangest emotional ride I have ever been on. One day up one day down,it seems to always be in my mind. I am going to fight like hell and do like you and encourage every man I know to get his PSA checked . I have my wife and family in my corner but I have to admit I am “scared shitless” thank you for your story, I will keep up the good fight. With respect, Chet

Love you Sir! So glad you are doing well. I endured OCD , depression, anxiety and agoraphobia and I overcame that too and today I write inspirational articles for mental health organizations and I transformed my physique from 135 pounds to over 240 pounds . God bless you with a long , healthy beautiful life . Sincerely , Danny Gautama , Windsor , Ontario

I had the same surgery and then a recurrence of the cancer and i beat it both time because i have always used my idol Bret Hart’s attitude. I always strive in life , my job, and most important life’s challenges to be the best there is, was or ever will be !!! Thank you for all you have given us Mr. Hart !!!!

BRETT , I HAVE BEEN A FAN FOR A VERY LONG TIME AND I FULLY AGREE WITH YOU GROWING OLDER YOU LOSE A LOT OF FFRIENDS, I THANK GOD YOUR ARE GOING WELL AFTER YOUR CANCER AND STROKE . I CAN SAY IT SUCKS GROWING OLDER. I MET YOU BREFLY AT THE UTICA WAR MEMORIAL IN UTICA NEW YORK. I STILL HAVE THE PICTURE , MY BROTHER TOOK OF YOU TALKING TO ME. MAY GOD BLESS AND KEEP YOU HEALTHY AND SAFE . GOD BLESS YOU AND YOUR FAMILY,

Dear Mr. Hart,
I have followed your career for years. I even wrestled in high school for four years, that is how much I loved the sport. I am now 61 years old and still watch every week but lets face it . It’s not like it used to be your era was the best there will ever be. Like you I had prostate cancer as well and had the same procedure so I know you know some of the side effects after the surgery. Mine was 10/22/19 and the first week in December I plan to go back to work “by the way I drive trucks for a living”. My question is how did you control your bladder after the surgery if you don’t mind talking about it and thank you for all you have done for the sport and yes I walk now everyday, at one point I was at 270lbs at 5″6 I’m now at 230lbs trying my best to get to 175lbs wish me luck I’m working hard at it now because I take care of my father who is now 92 the cost for me to be out of work has been in the thousands so I am going back to work to catch-up but I would love to here what you did to overcome your battle.

Thank you for all the memories loyal fan
Francis J. Bolds Jr

I’m 13 years post prostate cancer. When I heard you had it, my message to you was your going to make it. Being a survivor too I figure that gad has more for us to do yet on this earth. Godbless

I was diagnosed last fall, and it has changed my life. I went through so much since then, it seems, almost like a lifetime ago.

I have always been a Stampede Wrestling fan since we came to Canada in 1967 . My father got to know many people over the years, including the late greatest wrestler\promoter Stu Hart (we used to get free tickets to the shows in Edmonton’s Kinsmen Fieldhouse). I remember too, the Great matches, so many, With the heels Stomper, Abdullah the butcher, Bad News Allan, the Cuban Assassin, and so many others, Stu sometimes would get in there, to set things right when all hell broke loose, with his lock, accusations of the heels of the hart mafia, and al the great matches with Bruce Hart, Keith Hart, Bret Hart, Davey Boy Smith, etc…

I watched Chris Benoit’s first professional match, Owen debut, When I was young I used to love Dan Kroffat, Les Thornton, and the sometimes heel some time babyface Dynamite Kid…

We also used to go to the Alberta Game Farm, and sometimes we would meet Al Oeming.

My dad in those days 1968-late 1970’s was a moderately successful business man, who became friends with a man who used to wrestle part time for Stampede in the late 1950’s -1960’s, he helped us along in those days to become Canadians. His oldest son and I would play wrestle with the two fathers watching and cheering (being younger and smaller I mostly could not hold him off, but was always trying and I know my dad took a bit of ribbing when I gave in most times) after watching Stampede Wrestling on Saturday afternoons. Sometimes the dads would also fool around with us. Sometimes we set up tag teams with other kids, and siblings.

In any case nothing will ever be as good as the good old fashioned Stampede Wrestling, and I have always been awe struck that so many wrestlers, and Bret Hart in particular, never seriously hurt or ever killed wrestlers like the WWE. It is a shame what they did to so many and Bret and Owen. Let’s not mention Owen Hart or Chris Benoit, or Davey Boy and Dynamite Kid, and many many others, it is a killing machine, the promo, and few get out alive.

Bret turned out to be my favourite, especially that last few years right till he ended his career in WCW.

HE WAS/IS/AND ALWAYS WILL BE THE MAN…

Once I found out he had Prostate Cancer, and survived, knock on wood. I knew I would too, he is my hero and inspiration, as I transition to a new life.

I hope, no I know I will beatbthis!

God keep you safe Bret, thanks for the memories, I hope one day to meet you, I also hope to help others once I am better, and would love to be associated with anything Bret does for Prostate Cancer, and any other worthwhile causes.

Best wishes, and all my hopes for you to have all your dreams come true.

This site uses Akismet to reduce spam. Learn how your comment data is processed.